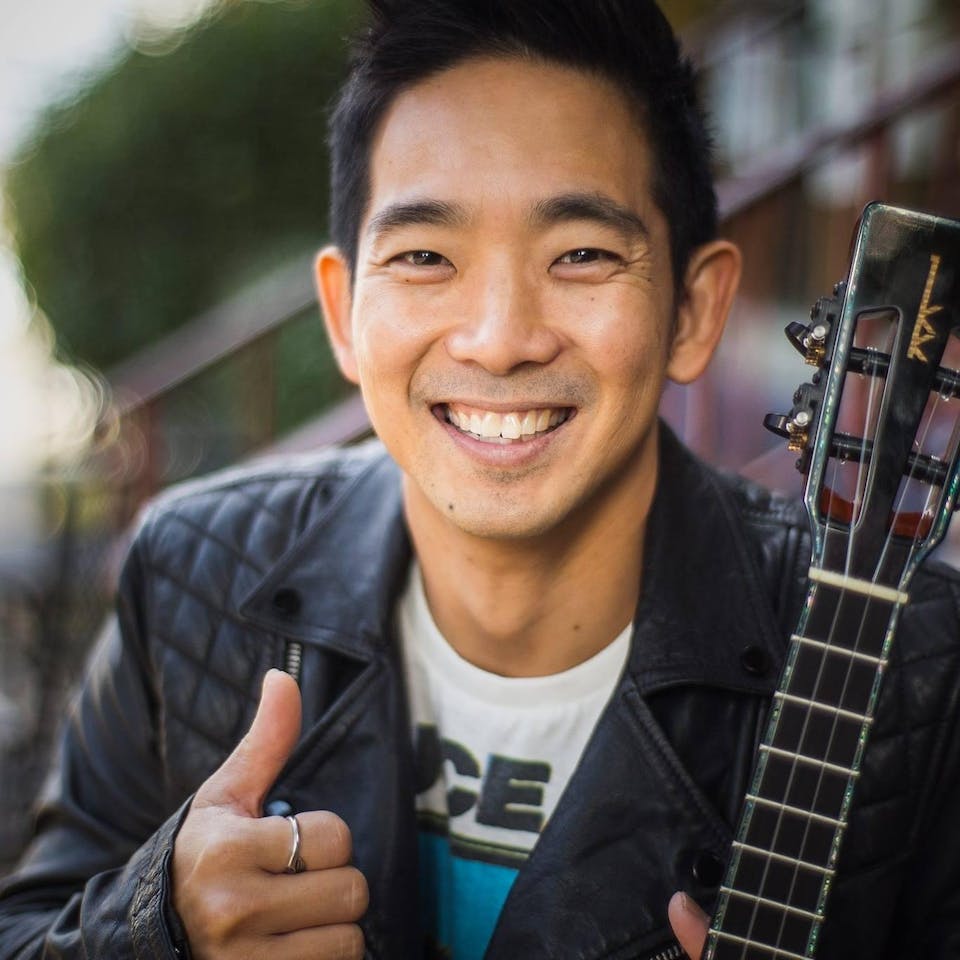 It was nearly 15 years ago that the world first caught notice of the stunning musical artistry of Jake Shimabukuro. The young ukulele player’s gorgeous rendition of George Harrison’s classic rock ballad “While My Guitar Gently Weeps” became one of the most-watched clips on the then newly launched YouTube platform. A lavish, exhilarating feast of a performance, it signaled the emergence of a prodigiously gifted virtuoso who was redefining how the ukulele was played and heard.

Few artists arrive so clearly – and singularly – talented as Shimabukuro. Guitar Player magazine called him “the Jimi Hendrix of the ukulele.” And no less than Pearl Jam’s Eddie Vedder, himself a four-string enthusiast, weighed in with this glowing assessment: “Jake is taking the instrument to a place that I can’t see anybody else catching up with him.”

That’s because the Hawaii native was burning up the ground behind him. Since the release of his 2006 album, Gently Weeps, Shimabukuro has been riding a wave of breakthroughs and triumphs rare for any musician, let alone one who plays a ukulele. A tireless live performer, he’s floored audiences across the globe, appearing at music festivals as varied as Bonnaroo and the Fuji Rock Festival. He’s played with world-renowned orchestras at prestigious venues from the Hollywood Bowl to the Sydney Opera House. He even performed for that rarest of audiences: Her Majesty Queen Elizabeth II. And all the while, he’s issued a string of chart-topping and award-winning albums that have challenged all notions of what is possible with a ukulele.

“People call me ‘an ambassador for the ukulele,’ but I really don’t see myself that way,” Shimabukuro says. “I’m simply a fan of the instrument. Ever since I was a kid, I just loved playing it, and over time, I started to realize that you could do more than just play traditional songs on it. You can play heavy metal riffs and make different sounds. You can make it rock like an electric guitar. There’s no end to what you can do on the ukulele, and it’s been rewarding for me to show that to people all over the world.”

For the past five years, bassist Nolan Verner has been a constant presence on stage and in the studio with Shimabukuro, and two years ago, guitarist Dave Preston joined the fold. The three clicked so well on the road and during the recording of Shimabukuro’s 2018 album, The Greatest Day, that the ukulele master decided to document their sonic alchemy in a more official way on his newest album, Trio. Unlike previous releases that sometimes featured studio musicians, this would be a true band album, with the only sounds performed by Shimabukuro, Verner and Preston, and many of the songs would be written spontaneously in the studio. In this way, Triomarks a bold and exciting new era in Shimabukuro’s already remarkable career.

“I really wanted to capture the sound that Nolan, Dave and I make when we jam together,” Shimabukuro explains. “We get into this amazing improvisational zone at soundchecks: Nolan will play a cool bassline, and Dave will chime in with these incredible guitar parts. Then I’ll come in right after and play melodies to what they’re doing, and before you know it we’ve got a song. So I finally said, ‘We should just go into the studio, hit ‘record’ and see what happens. It would be an experiment, but I had a feeling that great things would come from it.”

Verner notes that he and Preston jumped at the opportunity to transfer their live approach to the studio. “One of the great things about Jake is how he allows Dave and I to flesh out our own parts and really be part of the music,” he says. “The two of them are so extraordinary in how they play, and that’s made me rethink my role as a bassist. We’ve locked into an identifiable sound, and I think listeners will hear that on Trio.”

Earlier this year, the three musicians holed up in Nashville’s Sound Emporium studio with only a few snippets of riffs and melodies fleshed out, and over the course of a week jams took flight and became songs. Guiding the process was producer R.S. Field (Steve Earle, Webb Wilder), whose relationship with Shimabukuro began with 2016’s Nashville Sessions and continued with The Greatest Day. “This was different from anything we’ve ever tried, and R.S. was the perfect producer for it,” Shimabukuro enthuses. “He’s got such amazing ears and instincts, and he was fearless in how he let us go for it.”

“Fearless” aptly describes how Shimabukuro, Verner and Preston created “When the Masks Come Down,” the opening track on Trio. A beguiling mix of ambient, Edge-like patterns, incandescent melodies and mammoth hard-rock crunch, it unfolded like magic during a studio jam. “We just get going back and forth, inspiring each other,” Shimabukuro recalls. “It’s unbelievable how we can start out with nothing, but before long we’ve got a very big ‘something’ going on.”

A very different process attended the writing of “Twelve,” a bewitching metaphysical mood piece. Although Shimabukuro based its structure on Set Theory, a branch of mathematics that also corresponds to the 12 tones of the Western music scale, one doesn’t have to be an academic to luxuriate in the song’s bountiful beauty. As Preston says, “The track just grabs you and has its way with you. It sounds like nothing I’ve ever heard before.”

“Resistance” is an evocative gem, brimming with playful, echo-drenched ukulele lines that dance wildly around Preston’s wistful chordal work. The track segues into “Lament,” a deeply transfixing experience in which the three players lock into a shared meditative moment – there’s soothing bass, soaring ukulele tones and sweeping lap steel – that is sure to captivate listeners.

The mood shifts abruptly – joyously and energetically so – on the next cut, a spirited take on flamenco peppered with Preston’s briskly strummed acoustic guitar and Shimabukuro’s sensual, Spanish-flavored melodies. “We didn’t have a title for it,” says Shimabukuro, “but when I played it for one of my sons, he said that we should call it ‘Red Crystal.’ And it made so much sense – like the color flamenco red, but the sounds are like crystals.”

Inspired by the recent birth of his own son, Verner came up with the basis for “Morning Blue.” Fittingly, the song unfolds like a tender lullaby, full of gentle atmospherics and Shimabukuro’s angelic ukulele touches. “I had the idea for it when my wife was pregnant,” Verner remembers. “I showed it to the guys, and they loved it and ran with it. They made it very beautiful.”

And it was Preston, late one night in the studio, who spearheaded “Summer Rain.” “He started playing this progression that was just perfect,” says Shimabukuro. “So we quickly jumped on it, and by the next morning we recorded it.” Elegant and tranquil, the track glides by on Preston’s arresting acoustic guitar patterns and swirling lap steel textures while Verner responds with rolling bass and Shimabukuro adds all manner of shimmering, cascading ukulele touches.

Re-imaging beloved classics has become a Shimabukuro specialty, and on Trio, he and the band have their own unique way with Pink Floyd’s “Wish You Were Here.” The suggestion to record the song came from Skimabukuro’s longtime manager, Van Fletcher, a dedicated Floyd fan who had given the ukulele titan the album of the same name years ago and pressed him to listen to it – which he did. Acting on such inspiration, the three musicians turn in a glorious reading – the blend of Preston’s rustic guitar lines, Verner’s richly intuitive bass playing along with Shimabukuro’s ravishing treatment of melodies is one of the album’s standout moments.

The frisky and flighty lyricism of the aptly named “Fireflies” makes for sustained bliss, and Shimabukuro gives a big shout-out to the tune’s composer (who also happens to be his longtime video director), Coleman Saunders. “I was jamming with Coleman one night in the studio, and I started improvising over what he was doing. Dave came in and was knocked out. The next day, we asked Coleman if we could record it, and he was thrilled. It was just so cool and vibey – we had to do it.”

Shimabukuro has always loved the traditional Hawaiian song “Waialae,” and he has fond memories of performing it with fellow islanders the Side Order Band on his first tour of Japan some 25 years ago. As a tribute to the group, he includes an impeccable version of the tune on Trio. Each member shines spectacularly during this inviting and engaging trip.

The three musicians spread the waters of pastoral folk on the heavenly “On the Wing,” which Shimabukuro viewed as “a simple ukulele song” when he started writing it. “That was until R.S. Field suggested to Dave that he should triple his lap steel. Suddenly, the tune took on a George Harrison vibe, and everything Dave played really complemented the other instruments. The whole thing just opened up – it was unreal.”

The title of “Strong in the Broken Places” comes from a line in an Ernest Hemingway quote, but listeners won’t find one weak spot in its enthralling blend of soundscapes and courtly melodic lyricism. The album could have ended there and been considered a triumph, but Shimabukuro, Verner and Preston conclude Trio with an incandescent version of Fleetwood Mac’s “Landslide” that features a sparkling vocal performance by Preston’s wife, Rachel James. (When he’s not touring or recording with Shimabukuro, Preston plays with James in the Denver-based folk-rock band Dearling.)

“I’ve always loved Fleetwood Mac,” says Shimabukuro, “and I just adore the sound of Rachel’s voice – she’s played with us live. When we decided to record the song, I knew we had to have Rachel sing it, and she did an incredible job.”

For Japanese fans, Trio boasts a bonus track, “143,” but in no way is it a casual throwaway. A richly transcendent mix of folk and Hawaiian styles, it casts an otherworldly spell, and the fullness of feeling that the three musicians coax from their instruments is a supreme pleasure.

Music fans will no doubt hail Trio as an highwater mark for Shimabukuro, and the artist himself regards it as a personal best. “Beyond playing the ukulele, I’ve really tried to grow as a writer,” he says. “Spending time in Nashville and being around great songwriters has inspired and influenced me, and of course, working with Nolan and Dave has brought me to musical places I never thought possible. I’m so proud of the music we make together, and I can’t thank them, R.S. Field and Van Fletcher for everything that they do. This record really captures our collective spirit, and I can’t wait to get out there and play these songs live.”